Well folks, a little over a week ago I was not feeling good. We’re talking vomiting, lethargy, lack of interest in being outside, and the dreaded runny number twos! Let’s just say it wasn’t a Frisbee catch in the park. I’ll tell you what was fun though, making my mom worry! I think the best way ever to get unlimited amounts of attention is to basically act like I’m dying. In fact, I may have to think some more about this.

It all started, well visually reared it’s head, last weekend when I was experiencing some minor symptoms. It was hack here and there, but nothing major, followed by not being able to keep some string cheese down (mom and I will never look at string cheese the same way again), before it really led to my inability to keep food down come a Sunday evening.

Monday morning I was able to convince mom to stay home from work because I played it up that I just didn’t have the energy to walk around. This whole doting on me thing was going great until I realized she was taking me to the vet. Now don’t met wrong, I don’t mind the vet much because it’s an endless supply of people to give kisses to, but I’m not a big fan of their prodding. In fact, on this day I decided I would really put the vet and vet techs to work and act like I was dying when they touched my stomach. Boy did I get a lot of “Oh you poor, boy” during those moments.

Well guys, that strategy back fired on me because it meant they had to do more testing. This meant more prodding, being away from mom, and even a set of x-rays. What was I thinking! To express that I was actually fine, I decided I would put up a good protest at being away from mom. I mean, I was showing more enthusiasm for life so I should have been good at that point, right?. Wrong. I did such a good job at protesting during the x-ray that I ended up getting some meds that made me super sleepy – for like a whole day! In fact, I was so lethargic the rest of the day that mom was a worried mess. Ah, the extra love and blankets and kisses. Was I playing it up here? I suppose that’s for my to know and no one to find out.

Anyway, fast forward to Tuesday morning and I had my follow-up vet appointment to recheck the x-ray and to get results of my testing. This time I was less enthusiastic about going to the vet because I remembered the previous day. No way was anyone taking my temperature again!

For my x-ray recheck mom requested no meds since I was so sleepy the entire previous day, and she was super happy with the decision. I got a great vet tech who laid on the x-ray table with me to help me feel better and settle. Mom sure did love that vet tech that day. And lucky for us the X-rays came back as nothing in the tummy, which was awesome. So next up came the blood work and all appeared to be normal, so that was good. Then it came to the poo sample, and well, turns out I had giardia. Yep, all of this could have been figured out with one simple test! We could have gotten away with no x-rays, no blood work, no two vet visits, etc. I just thought it would be more fun if I acted like I was dying – really make people fuss over me.

In the end, it turns out the treatment for giardia is pretty great. I got lots of chicken and rice, wet food, and even more snuggles and love. I have noticed though that mom is extra careful when I’m outside and she is constantly shooing me away from licking things – which next to Frisbee is my favorite thing to do. I’m not going to fret much though because I’m quicker than mom so I’ll still do my best to lick whatever I can get my tongue on as soon as she looks away.

Oh, and one more thing before we part this week, mom wants me to add in that she’s really happy she bought pet insurance for me. She’s mumbling about my endeavors to the vet being expensive, she’s glad she met the deductible already, and so on. Anyway, that’s boring so that’s all I have for this week – see you all next week when I’m going to tell you all about the wind in my fur! 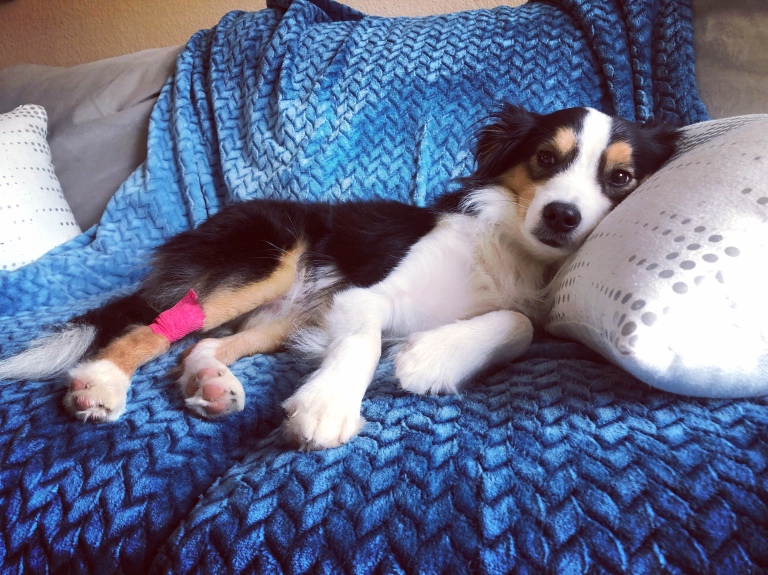