Alright everyone, I’d like to talk about tug-o-war. Specifically about the amazingness that that is this game . Can we all agree that it’s probably one of the most clever developments ever?  I mean I not only get to give my human a rope, but I get to try and take it and run at the same time! When this happens, wow the way my brain lights on fire just revs me up! How awesome is that!

Over the past year I’ve slowly but surely taught my mother how tug-o-war works. We briefly had a momentary slip-up when she broke my tooth off with a Frisbee, but I think we we’ve perfected the game since then. After “the incident” I started by grabbing socks and refusing to let go when she wanted to have them back. From there I progressed to her bathrobe tie, then to any towel/shirt/pants/whatever she was trying to fold, and we eventually made our way to the tug rope.

See, I originally had a tug rope from the beginning, but it was more something that I liked to carry around as opposed to using it for my own gaming endeavors. However, after the build up from the other items above, I realized the power of this tug rope. Whenever mom and I grab the rope together my brain jumps to hyper drive and suddenly I’m fighting for power in a post-apocalyptic world. Before I know I’m digging in to win the battle and you can hear me from any room!

The only troublesome part about this game is that mom isn’t always up to play. There are times I’ll bring her the rope and drop it in her lap, but she doesn’t do anything. It’s so annoying. So naturally I have to become a bit more persistent. I’m not going to say that includes shoving it in her face, but I’m not going to say that doesn’t happen. After a couple minutes she gets the idea and before I know it we’re back in battle and I’m determined to be victorious.

I could say a lot more about this game, but right now I need to continue shoving the rope into mom’s face. Oh wait, I mean her hand… 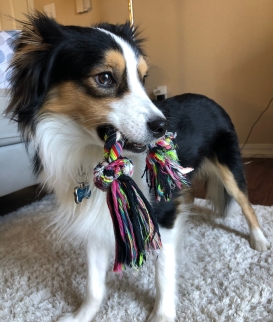